Namibia has the second-lowest population density of any sovereign country, after Mongolia.[133] The majority of the Namibian population is of Bantu-speaking origin—mostly of the Ovambo ethnicity, which forms about half of the population—residing mainly in the north of the country, although many are now resident in towns throughout Namibia. Other ethnic groups are the Herero and Himba people, who speak a similar language, and the Damara, who speak the same “click” language as the Nama.

In addition to the Bantu majority, there are large groups of Khoisan (such as Nama and San), who are descendants of the original inhabitants of Southern Africa. The country also contains some descendants of refugees from Angola. There are also two smaller groups of people with mixed racial origins, called “Coloureds” and “Basters“, who together make up 8.0% (with the Coloureds outnumbering the Basters two to one). There is a substantial Chinese minority in Namibia; it stood at 40,000 in 2006.[134]

Whites (mainly of Afrikaner, German, British and Portuguese origin) make up between 4.0 and 7.0% of the population. Although their proportion of the population decreased after independence due to emigration and lower birth rates, they still form the second-largest population of European ancestry, both in terms of percentage and actual numbers, in Sub-Saharan Africa (after South Africa).[135] The majority of Namibian whites and nearly all those who are mixed race speak Afrikaans and share similar origins, culture, and religion as the white and coloured populations of South Africa. A large minority of whites (around 30,000) trace their family origins back to the German settlers who colonized Namibia prior to the British confiscation of German lands after World War I, and they maintain German cultural and educational institutions. Nearly all Portuguese settlers came to the country from the former Portuguese colony of Angola.[136] The 1960 census reported 526,004 persons in what was then South West Africa, including 73,464 whites (14%).[137] 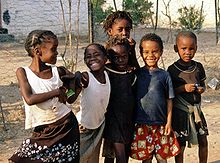 Namibia conducts a census every ten years. After independence the first Population and Housing Census was carried out in 1991; further rounds followed in 2001 and 2011.[138] The data collection method is to count every person resident in Namibia on the census reference night, wherever they happen to be. This is called the de facto method.[139] For enumeration purposes the country is demarcated into 4,042 enumeration areas. These areas do not overlap with constituency boundaries to get reliable data for election purposes as well.[140]